Create an Account - Increase your productivity, customize your experience, and engage in information you care about.

The Maricopa County Attorney’s Office has three four-legged cuddly team members working in the Victim Services Division. Tori, an English Labrador Retriever, along with Elle and Morgan, both Golden Retrievers, are facility dogs trained to work with victims of crime.

Young victims in particular are often traumatized by heinous crimes and intimidated by the criminal justice system. As members of the K9 Victim Support Program (VSP), Tori, Elle and Morgan provide calming, comforting support for these victims throughout the often stressful criminal justice process. Their special training allows them to perform this important function in a variety of behavioral situations and to remain focused when working with outside noises including sirens, emergency workers and even gavels.

In addition to attending court hearings, the K9 VSP team accompanies victims during interviews and meetings related to their case. They offer a reassuring presence for victims as they prepare testimony, give depositions and, in some instances, confront perpetrators. Tori, Elle and Morgan spend many hours each week in the County Attorney’s Office and happily interact with MCAO employees. They also represent the office at select community events.

Starting in May of 2010, Sam became the first member of the MCAO K9 VSP. Throughout his six-year career with MCAO, Sam helped more than 750 children and adult witnesses and victims by calming their anxieties before what many consider a very stressful situation; testifying in court. Although officially retired from the Office in July of 2016, he led the way for additional facility dogs to be adopted into the Program. 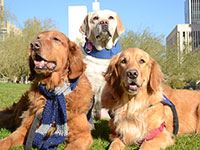